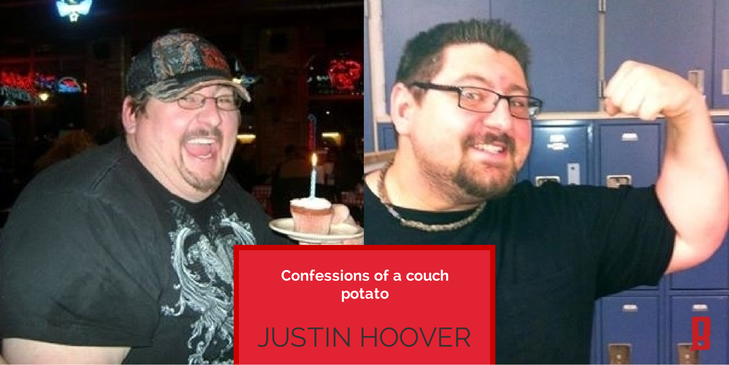 Mr. Justin Hoover reached out to Bond Appetit after he started listening to the podcast. After I heard his story, I knew that I had to highlight his story. Justin now is a part of Bond Appetit and will author the series labelled, Confessions of a Former Couch Potato.

I struggle daily with food. What I should eat and what I shouldn’t eat. My struggle with food was always around but never popped up until I was 19. You see I was young and athletic and played 2 sports in school. I always ate horribly though and didn’t know it. And, in a life changing event it all became apparent.

In 2002, I was in a car wreck that should have ended my life. I had to be pulled out of the U-shaped mass with a tool called “the jaws of life”. The Doctor said I would never walk again without a walker. Or at bare minimum, a cane. I fell into a deep and dark depression. Did nothing but lay in the hospital bed my parents bought for me. I did nothing but lay there and eat anything that came in a shiny box bag or can in mass quantity.

After all said and done my weight was at 470 lbs. in July of 2013. I started to make changes. Small ones at first, and then an all encompassing life style change. Due to these changes I have lost well over 100 lbs and almost to 200 lbs. The secret? I stopped eating garbage and got off the stupid sofa. The secret is, there is no secret.

Putting in the nutritional work is what helped when I wasn’t able to move. I prefer the paleo diet as I hunt and fish, but that’s what works for me. The thing is our bodies respond to different things in different ways. You have to find what works for you and then go for it. There are going to be times when you fall off the wagon, we are human not robots.

The life of now

The thing I love about healthy food is how good it all tastes, which is a deeply controversial thing to say. With a little seasoning done right I would take a deer steak with a fresh summer salad over a Big Mac and super sized fries any day. When you taste healthy food done right it will change your world.

I got off my couch and into the real world, so can you. Join us, for easy ways to find out how.