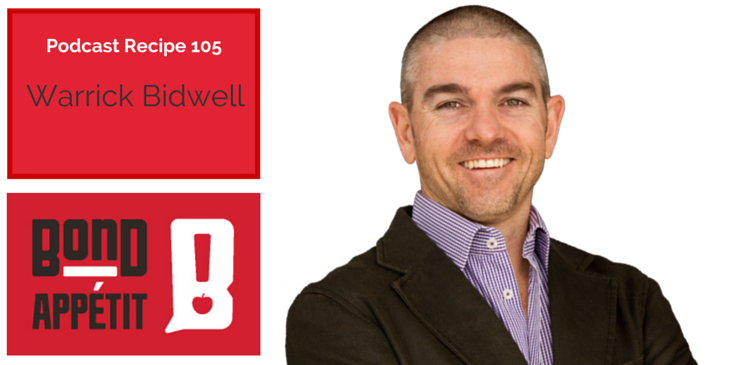 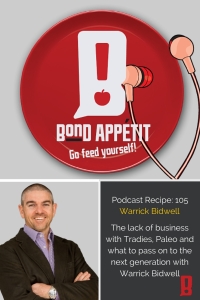 105. The lack of business with Tradies, Paleo and what to pass on to the next generation with Warrick Bidwell

Warrick Bidwell grew up son of a tradie builder. Warrick had planned to follow in his father’s footsteps and join his building business, but after some encouragement he instead became first of his extended family to attend university. After attending the university Warrick went on to work for some of Australia’s biggest companies in accounting and sales roles, eventually leading him to then build and sell his own financial planning practice.

Warrick used all this experience to work towards his passion  for helping small business owners. Warrick has over 12 years of individually coaching and mentoring businesses, including hundreds of ‘tradies.’

Warrick was born to a long family line of Tradies, and accounts this for some of their success. The Tradies Business Show was received very well, with audience of trades stating that they finally have a show that actually gets the trade life.

The Tradies Business Show is made for people like Warrick’s father who literally worked his guys out to make a living. Warrick states that his family always had what they needed, due to his father’s hard work. The Tradies Business Show’s goal is to help Tradies like his hardworking father, build an asset and leave a legacy, rather than just work really really hard to pay bills, they want to help trades actually enjoy their life.

Aside from Warrick’s success with his company, The Tradies Business Show, he also is very passionate about eating and living healthy. During his college years, Warrick became sick with numerous ailments ranging from acid reflux, chronic sinusitis, psoriasis, IBD, and difficulty sleeping. Relying on medicines from the doctors, became second nature, until Warrick was introduced to the Paleo Solution by Robb wolf. After reading the book, and staying on the strict diet for 30 days, he began to immediately see relief in his symptoms. Now 5 years later, Warrick is nicknamed the “Paleo evangelist” because he no longer relies on medicines, and no longer suffers from all the ailments that had plagued him for over 12 years.

Paleo eating plan, variety of fruits and veggies. Eating fruits and vegetables that are currently in season. This sustainable way of eating is how our bodies were built.

If you could have dinner with anyone who would it be?

Robb Wolf  because his book started it all. He is amazing because he uses a mix of science background, encouraging others to try it, and using himself as a guinea pig.

Where would you want to have this dinner?

One of the great Paleo cafe’s here in Australia or one of Robb Wolf’s places in California.

Where to find Warrick Bidwell